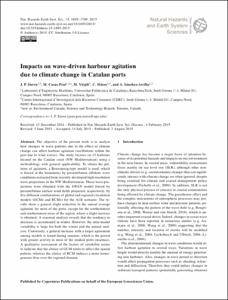 Except where otherwise noted, content on this work is licensed under a Creative Commons license : Attribution 3.0 Spain
Abstract
The objective of the present work is to analyse how changes in wave patterns due to the effect of climate change can affect harbour agitation (oscillations within the port due to wind waves). The study focuses on 13 harbours located on the Catalan coast (NW Mediterranean) using a methodology with general applicability. To obtain the patterns of agitation, a Boussinesq-type model is used, which is forced at the boundaries by present/future offshore wave conditions extracted from recently developed high-resolution wave projections in the NW Mediterranean. These wave projections were obtained with the SWAN model forced by present/future surface wind fields projected, respectively, by five different combinations of global and regional circulation models (GCMs and RCMs) for the A1B scenario. The results show a general slight reduction in the annual average agitation for most of the ports, except for the northernmost and southernmost areas of the region, where a slight increase is obtained. A seasonal analysis reveals that the tendency to decrease is accentuated in winter. However, the inter-model variability is large for both the winter and the annual analysis. Conversely, a general increase with a larger agreement among models is found during summer, which is the period with greater activity in most of the studied ports (marinas). A qualitative assessment of the factors of variability seems to indicate that the choice of GCM tends to affect the spatial pattern, whereas the choice of RCM induces a more homogeneous bias over the regional domain.
CitationSierra, J.P., Casas, M., Moesso, C., Virgili, M., Sanchez-arcilla, A. Impacts on wave-driven harbour agitation due to climate change in Catalan ports. "Natural hazards and earth system sciences", 2015, vol. 15, núm. 8, p. 1695-1709.
URIhttp://hdl.handle.net/2117/77205
DOI10.5194/nhess-15-1695-2015
ISSN1561-8633
Publisher versionhttp://www.nat-hazards-earth-syst-sci.net/15/1695/2015/nhess-15-1695-2015.pdf
Collections
Share: