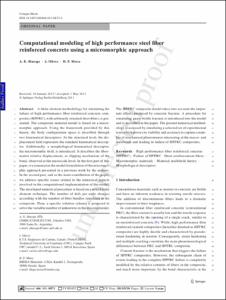 Mora, Diego Fernando
Document typeArticle
Rights accessOpen Access
European Commission's projectCOMP-DES-MAT - Advanced tools for computational design of engineering materials (EC-FP7-320815)
Abstract
A finite element methodology for simulating the failure of high performance fiber reinforced concrete composites (HPFRC), with arbitrarily oriented short fibers, is presented. The composite material model is based on a micromorphic approach. Using the framework provided by this theory, the body configuration space is described through two kinematical descriptors. At the structural level, the displacement field represents the standard kinematical descriptor. Additionally, a morphological kinematical descriptor, the micromorphic field, is introduced. It describes the fiber–matrix relative displacement, or slipping mechanism of the bond, observed at the mesoscale level. In the first part of this paper, we summarize the model formulation of the micromorphic approach presented in a previous work by the authors. In the second part, and as the main contribution of the paper, we address specific issues related to the numerical aspects involved in the computational implementation of the model. The developed numerical procedure is based on a mixed finite element technique. The number of dofs per node changes according with the number of fiber bundles simulated in the composite. Then, a specific solution scheme is proposed to solve the variable number of unknowns in the discrete model. The HPFRC composite model takes into account the important effects produced by concrete fracture. A procedure for simulating quasi-brittle fracture is introduced into the model and is described in the paper. The present numerical methodology is assessed by simulating a selected set of experimental tests which proves its viability and accuracy to capture a number of mechanical phenomenon interacting at the macro- and mesoscale and leading to failure of HPFRC composites.
Description
The final publication is available at Springer via http://dx.doi.org/10.1007/s00466-013-0873-4
CitationHuespe, A., Oliver, J., Mora, D. Computational modeling of high-performance steel fiber reinforced concrete using a micromorphic approach. "Computational Mechanics", Desembre 2013, vol. 52, núm. 6, p. 1243-1264.
URIhttp://hdl.handle.net/2117/77099
DOI10.1007/s00466-013-0873-4
ISSN0178-7675
Publisher versionhttp://link.springer.com/article/10.1007/s00466-013-0873-4
Collections
Share: