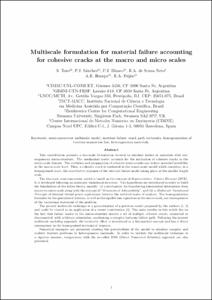 Feijóo, R.A.
Document typeArticle
Rights accessOpen Access
ProjectCOMP-DES-MAT - Advanced tools for computational design of engineering materials (EC-FP7-320815)
Abstract
This contribution presents a two-scale formulation devised to simulate failure in materials with heterogeneous micro-structure. The mechanical model accounts for the nucleation of cohesive cracks in the micro-scale domain. The evolution and propagation of cohesive micro-cracks can induce material instability at the macro-scale level. Then, a cohesive crack is nucleated in the macro-scale model which considers, in a homogenized sense, the constitutive response of the intricate failure mode taking place at the smaller length scale. The two-scale semi-concurrent model is based on the concept of Representative Volume Element (RVE). It is developed following an axiomatic variational structure. Two hypotheses are introduced in order to build the foundations of the entire theory, namely: (i) a mechanism for transferring kinematical information from macro-to-micro scale along with the concept of “Kinematical Admissibility”, and (ii) a Multiscale Variational Principle of internal virtual power equivalence between the involved scales of analysis. The homogenization formulae for the generalized stresses, as well as the equilibrium equations at the micro-scale, are consequences of the variational statement of the problem. The present multiscale technique is a generalization of a previous model proposed by the authors (Sánchez et al., 2013; Toro et al., 2014) and could be viewed as an application of a recent contribution (Blanco et al., 2014). The main novelty in this article lies on the fact that failure modes in the micro-structure involve a set of multiple cohesive cracks, connected or disconnected, with arbitrary orientation, conforming a complex tortuous failure path. Following the present multiscale modeling approach, the tortuosity effect is introduced as a kinematical concept and has a direct consequence in the homogenized mechanical response. Numerical examples are presented showing the potentialities of the model to simulate complex and realistic fracture problems in heterogeneous materials. In order to validate the multiscale technique in a rigorous manner, comparisons with the so-called DNS (Direct Numerical Solution) approach are also presented.
CitationToro, S., Sánchez, P., Blanco, P., de Souza, E., Huespe, A., Feijóo, R. Multiscale formulation for material failure accounting for cohesive cracks at the macro and micro scales. "International journal of plasticity", Gener 2016, p. 75-110.
URIhttp://hdl.handle.net/2117/77059
DOI10.1016/j.ijplas.2015.07.001
ISSN0749-6419
Publisher versionhttp://www.sciencedirect.com/science/article/pii/S0749641915001199
Collections
Share: