A two-scale failure model for heterogeneous materials: numerical implementation based on the finite element method 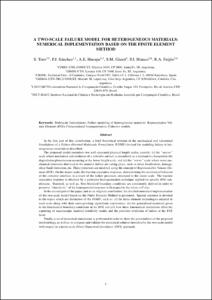