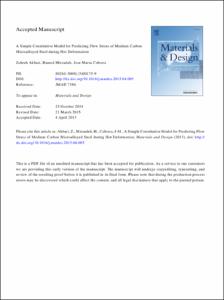 Document typeArticle
Rights accessOpen Access
Abstract
The constitutive behavior of a medium carbon microalloyed steel during hot working over a wide range of temperatures and strain rates was studied using the Johnson-Cook (JC) model, the Hollomon equation, and their modifications. The original JC model was not able to predict the softening part of the flow curves and the subsequent modifications of the JC model to account for the softening stage and the strain dependency of constants were not satisfactory owing to the uncoupled nature of the JC approach regarding strain rate and temperature. The coupled effect of these variables was considered in the form of Zener-Hollomon parameter (Z) and the constants of the Hollomon equation were related to Z. This modification was found to be useful for the hardening stage but the overall consistency between the experimental flow curves and the calculated ones was not good. Therefore, a simple constitutive model was proposed in the current work, in which by utilization of the peak stress and strain into the Hollomon equation, good prediction abilities were attained. Conclusively, the proposed model can be considered as an efficient one for modeling and prediction of hot deformation flow curves. (C) 2015 Elsevier Ltd. All rights reserved.
CitationAkbari, Z., Mirzadeh, H., Cabrera, J. A simple constitutive model for predicting flow stress of medium carbon microalloyed steel during hot deformation. "Materials and design", 15 Juliol 2015, p. 126-131.
URIhttp://hdl.handle.net/2117/76891
DOI10.1016/j.matdes.2015.04.005
ISSN0261-3069
Publisher versionhttp://www.sciencedirect.com/science/article/pii/S0261306915001739
Collections
Share: