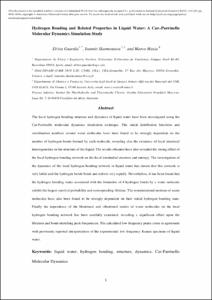 Skarmoutsos, Ioannis
Masia, Marco
Document typeArticle
Rights accessOpen Access
European Commission's projectHPC-EUROPA2 - Pan-European Research infrastructure on High Performance Computing for 21st century Science (EC-FP7-228398)
Abstract
The local hydrogen-bonding structure and dynamics of liquid water have been investigated using the Car-Parrinello molecular dynamics simulation technique. The radial distribution functions and coordination numbers around water molecules have been found to be strongly dependent on the number of hydrogen bonds formed by each molecule, revealing also the existence of local structural heterogeneities in the structure of the liquid. The results obtained have also revealed the strong effect of the local hydrogen-bonding network on the local tetrahedral structure and entropy. The investigation of the dynamics of the local hydrogen-bonding network in liquid water has shown that this network is very labile, and the hydrogen bonds break and reform very rapidly. Nevertheless, it has been found that the hydrogen-bonding states associated with the formation of four hydrogen bonds by a water molecule exhibit the largest survival probability and corresponding lifetime. The reorientational motions of water molecules have also been found to be strongly dependent on their initial hydrogen-bonding state. Finally, the dependence of the librational and vibrational modes of water molecules on the local hydrogen-bonding network has been carefully examined, revealing a significant effect upon the libration and bond-stretching peak frequencies. The calculated low frequency peaks come in agreement with previously reported interpretations of the experimental low-frequency Raman spectrum of liquid water.
CitationGuardia, E., Skarmoutsos, I., Masia, M. Hydrogen bonding and related properties in liquid water: a Car-Parrinello molecular dynamics simulation study. "Journal of physical chemistry B", 23 Juliol 2015, núm. 29, p. 8926-8938.
URIhttp://hdl.handle.net/2117/76835
DOI10.1021/jp507196q
ISSN1520-6106
Collections
Share: