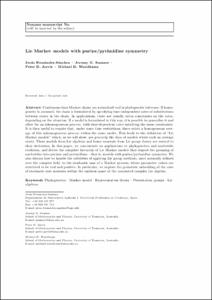 Except where otherwise noted, content on this work is licensed under a Creative Commons license : Attribution-NonCommercial-NoDerivs 3.0 Spain
Abstract
Continuous-time Markov chains are a standard tool in phylogenetic inference. If homogeneity is assumed, the chain is formulated by specifying time-independent rates of substitutions between states in the chain. In applications, there are usually extra constraints on the rates, depending on the situation. If a model is formulated in this way, it is possible to generalise it and allow for an inhomogeneous process, with time-dependent rates satisfying the same constraints. It is then useful to require that, under some time restrictions, there exists a homogeneous average of this inhomogeneous process within the same model. This leads to the definition of “Lie Markov models” which, as we will show, are precisely the class of models where such an average exists. These models form Lie algebras and hence concepts from Lie group theory are central to their derivation. In this paper, we concentrate on applications to phylogenetics and nucleotide evolution, and derive the complete hierarchy of Lie Markov models that respect the grouping of nucleotides into purines and pyrimidines—that is, models with purine/pyrimidine symmetry. We also discuss how to handle the subtleties of applying Lie group methods, most naturally defined over the complex field, to the stochastic case of a Markov process, where parameter values are restricted to be real and positive. In particular, we explore the geometric embedding of the cone of stochastic rate matrices within the ambient space of the associated complex Lie algebra.
CitationFernández-Sánchez, J., Sumner, J., Jarvis, P., Woodhams, Michael. Lie Markov models with purine/pyrimidine symmetry. "Journal of mathematical biology", 01 Març 2015, núm. 4, p. 855-891.
URIhttp://hdl.handle.net/2117/76817
DOI10.1007/s00285-014-0773-z
ISSN0303-6812
Publisher versionhttp://link.springer.com/article/10.1007%2Fs00285-014-0773-z
Collections
Share: