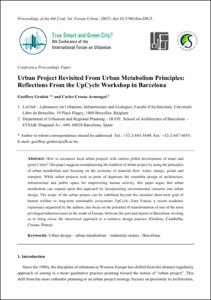 Document typeConference report
Rights accessOpen Access
Abstract
Since the 1980s, the discipline of urbanism in Western Europe has shifted from the abstract regulatory approach of zoning to a more qualitative practice pointing toward the notion of “urban project”. This shift from the more orthodox planning to an urban project strategy focuses on proximity to architecture, requalification of public space and is characterized by the so called “intermediate scale”. The urban renewal of Barcelona for the Olympic Games of 1992, the publication of UR-Urbanismo Revista (1985-1992) and the theoretical and design works of Manuel de Solà-Morales clearly contribute to embody a new approach, shared in a common tradition among different countries such as Belgium, France, Spain and Italy.For the last decade, the persisting economic crisis and the new management strategies have necessitated a review of urbanism practices. At the same time, new environmental issues seem to eclipse the urban project methodology : ecology, metabolism, sustainability and efficiency (smart) has become the main topics. Eco-industrial parks and sustainable neighborhoods are two examples of hi-tech normative urban models shifting the focus from the quality of urban space to the environmental efficiency. Therefore, the anatomic quality of the city, its form and space, seem now to be displaced to a secondary role by ecological matters.How to reconnect the spatial emphasis of urban project approach with current development of smart and green cities? This paper suggests reemphasising the tradition of urban project by using the principles of urban metabolism and focusing on the economy of material flows: water, energy, goods, etc. While urban projects took as point of departure the urban design of architecture, infrastructure and public space for empowering human activity, urban metabolism can expand upon this approach by incorporating environmental concerns into urban design. The scope of the urban project can be redefined beyond the short-term goal of human welfare to a long-term sustainable ecosystem. The UpCycle Zona Franca recent academic experience, focus on the transformation of one of the most privileged industrial areas in the south of Europe, between the port and airport of Barcelona, invite us to bring closer the theoretical approach to a tentative design practice.
CitationGrulois, G., Crosas, C. Urban Project Revisited From Urban Metabolism Principles: Reflections From the UpCycle Workshop in Barcelona. A: International Forum on Urbanism. "Proceedings of the 8th International Conference of the International Forum on Urbanism (IFoU), 2–24 June 2015, Incheon, Republic of Korea". Incheon: 2015, p. 708-716.
URIhttp://hdl.handle.net/2117/76693
DOI10.3390/ifou-D025
ISBN978-3-03842-096-5
Publisher versionhttp://sciforum.net/conference/ifou/paper/2766
Collections
Share: