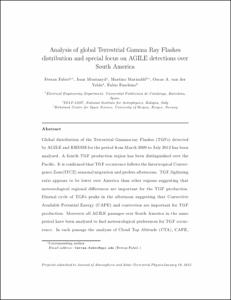 Except where otherwise noted, content on this work is licensed under a Creative Commons license : Attribution-NonCommercial-NoDerivs 3.0 Spain
Abstract
Global distribution of the Terrestrial Gamma-ray Flashes (TGFs) detected by AGILE and RHESSI for the period from March 2009 to July 2012 has been analysed. A fourth TGF production region has been distinguished over the Pacific. It is confirmed that TGF occurrence follows the Intertropical Convergence Zone (ITCZ) seasonal migration and prefers afternoons. TGF/lightning ratio appears to be lower over America than other regions suggesting that meteorological regional differences are important for the TGF production. Diurnal cycle of TGFs peaks in the afternoon suggesting that Convective Available Potential Energy (CAPE) and convection are important for TGF production. Moreover all AGILE passages over South America in the same period have been analysed to find meteorological preferences for TGF occurrence. In each passage the analysis of Cloud Top Altitude (CfA), CAPE, number of strokes, number of storms and coverage area of clouds with temperatures below 70 degrees C (Cloud Top Coverage area, CTC) are computed. On average, AGILE has been exposed to 19,100 strokes between each TGF representing similar to 68 h of exposure over active storms. High CAPE values, high cloud tops and high stroke occurrence suggest that meteorological conditions conducive to vigorous and electrically active storms are important for TGF production. It is shown that a high number of thunderstorms is preferable for TGF production which may be explained by a greater chance of the presence of a thunderstorm in the best development stage for TGF production. High tropopause altitude seems to be important but not primordial for TGF production. (C) 2015 Elsevier Ltd. All rights reserved.
CitationFabro, F., Montanya, J., Marisaldi, M., Van Der Velde, O., Fuschino, F. Analysis of global Terrestrial Gamma Ray Flashes distribution and special focus on AGILE detections over South America. "Journal of atmospheric and solar-terrestrial physics", 01 Març 2015, p. 10-20.
URIhttp://hdl.handle.net/2117/76648
DOI10.1016/j.jastp.2015.01.009
ISSN1364-6826
Collections
Share: