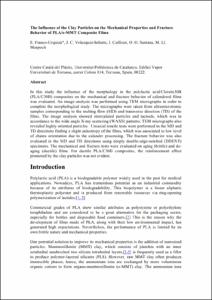 Document typeArticle
Rights accessOpen Access
Abstract
In this study, calendered films of polylactic acid/organo-montmorillonite clay (PLA/o-MMT) were prepared and the influence of the clay particles' morphology on the mechanical properties and fracture behavior was evaluated. An image analysis was performed using transmission electron microscopy micrographs to complete the morphological study. The micrographs were taken from ultramicrotomic samples corresponding to the melting flow (MD) and transverse direction (TD) of the films. The micrographs revealed intercalated particles and tactoids, which were in accordance with the wide angle X-ray scattering patterns. Uniaxial tensile tests were performed in the MD and TD directions, finding a slight anisotropy in the films, which was associated with a low level of polymer chain orientation due to the calender processing. The fracture behavior was also evaluated in the MD and TD directions using deeply double-edge-notched tension (DDENT) specimens. The mechanical and fracture tests were evaluated on aging (brittle) and deaging (ductile) films by applying a thermal treatment that consisted of heating above the glass transition temperature of the PLA and subsequent quenching. For ductile PLA composite films, the reinforcement effect promoted by the clay particles was not so evident.
CitationFranco, E., Velázquez-Infante, J.C., Cailloux, J., Santana, O., Maspoch, M. The influence of the clay particles on the mechanical properties and fracture behavior of PLA/o-MMT composite films. "Advances in polymer technology", 01 Març 2015, núm. 1, p. 21470-1-21470-11.
URIhttp://hdl.handle.net/2117/76640
DOI10.1002/adv.21470
ISSN0730-6679
Publisher versionhttp://onlinelibrary.wiley.com/doi/10.1002/adv.21470/abstract;jsessionid=E46A82415D984A0EBC19B43AA28AE768.f04t01
Collections
Share: