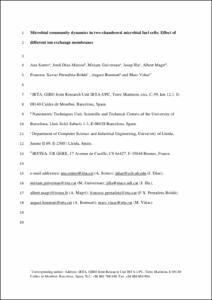 Prenafeta Boldú, Francesc Xavier
Bonmatí Blasi, August
Viñas Canals, Marc
Document typeArticle
Rights accessOpen Access
All rights reserved. This work is protected by the corresponding intellectual and industrial property rights. Without prejudice to any existing legal exemptions, reproduction, distribution, public communication or transformation of this work are prohibited without permission of the copyright holder
Abstract
BACKGROUND: The utilization of different kinds of ion exchange membrane is a common practice in bioelectrochemical systems such as two-chambered microbial fuel cells (MFCs). However, little is known about the effect of membrane materials on the anodic microbial community diversity.; RESULTS: The effect of two cationic and one anionic exchange membranes (Nafion N-117, Ultrex CMI-7000, and Ultrex AMI-7000) on the microbial community dynamics of Eubacteria and Archaea has been assessed in two-chambered MFCs. The experimental results indicated that the eubacterial community in the anodic chamber was not affected by the membrane materials, being predominantly populations of Bacteroidetes (Porphyromonadaceae) and -proteobacteria (Alcaligenaceae and Comamonadaceae). On the other hand, the archaeal counterpart appears to be highly dependent on the type of membrane used, as was evidenced by the selective enrichment of Methanosarcina sp. in the MFC equipped with the membrane Nafion N-117 which was the MFC that showed the highest current production.; CONCLUSIONS: The results obtained in the present study suggest that membrane materials affect archaeal diversity whereas both anodofilic eubacteria and methanogenic archaea populations could play an important role in the overall MFC process performance.
CitationSotres, A., Diaz, J., Guivernau, M., Illa, J., Magrí, A., Prenafeta, F., Bonmatí, A., Viñas , M. "Journal of chemical technology & biotechnology". 2015.
URIhttp://hdl.handle.net/2117/76616
DOI10.1002/jctb.4465
ISSN0268-2575
Publisher versionhttp://onlinelibrary.wiley.com/doi/10.1002/jctb.4465/abstract
Collections
Share: