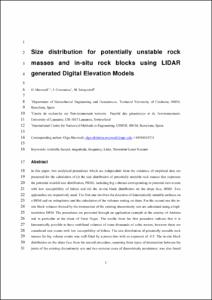 Jaboyedoff, M.
Document typeArticle
Rights accessOpen Access
Abstract
In this paper, two analytical procedures which are independent from the existence of empirical data are presented for the calculation of (1) the size distribution of potentially unstable rock masses that expresses the potential rockfall size distribution, including big volumes corresponding to potential rare events with low susceptibility of failure and (2) the in situ block distribution on the slope face. Two approaches are, respectively, used. The first one involves the detection of kinematically unstable surfaces on a digital elevation model (DEM) and on orthophotos and the calculation of the volumes resting on them. For the second one the in situ block volumes formed by the intersection of the existing discontinuity sets are calculated using a high-resolution DEM. The procedures are presented through an application example at the country of Andorra and in particular at the chute of Forat Negre. The results from the first procedure indicate that it is kinematically possible to have mobilized volumes of some thousands of cubic meters; however, these are considered rare events with low susceptibility of failure. The size distribution of potentially unstable rock masses for big volume events was well fitted by a power law with an exponent of -0.5. The in situ block distribution on the slope face from the second procedure, assuming three types of intersection between the joints of the existing discontinuity sets and two extreme cases of discontinuity persistence, was also found to follow a power law, but with an exponent of -1.3. The comparison with the observed in the field block volume distribution on the slope face indicates that in reality discontinuities have a very high persistence and that considering only their visible trace length overestimates volumes, which is conservative.
CitationMavrouli, O., Corominas, J., Jaboyedoff, M. Size distribution for potentially unstable rock masses and in situ rock blocks using LIDAR-generated digital elevation models. "Rock mechanics and rock engineering", 01 Juliol 2015, núm. 4, p. 1589-1604.
URIhttp://hdl.handle.net/2117/76613
DOI10.1007/s00603-014-0647-0
ISSN0723-2632
Publisher versionhttp://link.springer.com/article/10.1007%2Fs00603-014-0647-0
Collections
Share: