Large-scale rock slope failures in the eastern Pyrenees: identifying a sparse but significant population in paraglacial and parafluvial contexts 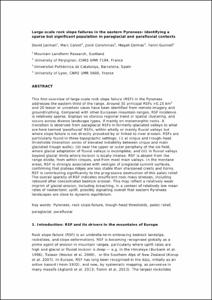 This first overview of large-scale rock slope failure (RSF) in the Pyrenees addresses the eastern third of the range. Around 30 principal RSFs >0.25 km2 and 20 lesser or uncertain cases have been identified from remote imagery and groundtruthing. Compared with other European mountain ranges, RSF incidence is relatively sparse, displays no obvious regional trend or spatial clustering, and occurs across diverse landscape types, if mainly on metamorphic rocks. A transition is observed from paraglacial RSFs in formerly-glaciated valleys to what are here termed ‘parafluvial’ RSFs, within wholly or mainly fluvial valleys but where slope failure is not directly provoked by or linked to river erosion. RSFs are particularly found in three topographic settings: (i) at cirque and trough-head thresholds (transition zones of elevated instability between cirque and main glaciated trough walls); (ii) near the upper or outer periphery of the ice field, where glacial adaptation of fluvial valleys is incomplete; and (iii) in fluvial valleys beyond glacial limits where incision is locally intense. RSF is absent from the range divide, from within cirques, and from most main valleys. In the montane areas, RSF is strongly associated with vestiges of preglacial summit surfaces, confirming that plateau ridges are less stable than sharpened crests and horns. RSF is contributing significantly to the progressive destruction of this paleic relief. The overall sparsity of RSF indicates insufficient rock mass stresses, including rebound after concentrated bedrock erosion. This may reflect a relatively weak imprint of glacial erosion, including breaching, in a context of relatively low mean rates of neotectonic uplift, possibly signalling overall that eastern Pyrenees landscapes are close to dynamic equilibrium.