Analysis of the actual shipping situation and the Port of bBarcelona : Strategy for the near future and application of Horizon 2020 policies. 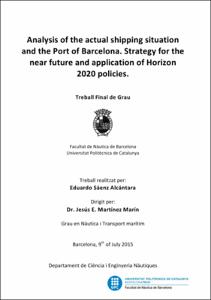 Document typeBachelor thesis
Rights accessOpen Access
Description
The shipping industry is making the ports to change continuously in order to adapt their strategies to new challenges to attract more traffic to their ports and to take into account seriously the impact of the industry to the environment. The Port of Barcelona (PoB) is not an exception for this and needs to detect its main weaknesses and strengths in order to improve its position. Nowadays, PoB is very far from some of its competitors despite being located near Africa and being one of the European closest port to Asia. Accordingly, it is needed to strengthen its positive factors and to improve the ones that are worst. For this reason, PoB needs a change of strategy focusing on its main market (China) and trying to catch traffic mostly from ports located in Africa (because its proximity) or United Arab Emirates (constantly growing during last years). In addition, for becoming a model to follow about green transport, it is urgent to have an international gauge to connect the port to Europe, build the Mediterranean Corridor and apply some policies explained in the program of the European Commission Horizon 2020 about inland connections (awards to the cleanest carriers, for example). Applying those measures, PoB could become a more competitive port and respectful with the environment. The methodology used in the study consists on a deep explanation about the PoB, a comparison between the port and the Port of Rotterdam (because its leadership in Europe), Valencia Port (because it is the closest and the second most important port of Spain) and Port of Marseille (because its proximity going to the North and its competitiveness). After the comparison, Horizon 2020 is applied to Port of Barcelona for finalizing making proposals that connect both parts of the work (traffics and environment).
SubjectsShipping, Harbors., Marine terminals., Port de Barcelona, Ports, Terminals marítimes, Transport marítim
URIhttp://hdl.handle.net/2117/76590
Collections
Share: