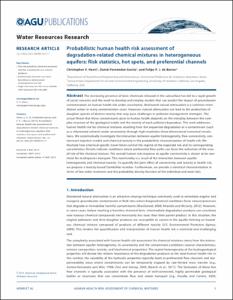 The increasing presence of toxic chemicals released in the subsurface has led to a rapid growth of social concerns and the need to develop and employ models that can predict the impact of groundwater contamination on human health risk under uncertainty. Monitored natural attenuation is a common remediation action in many contamination cases. However, natural attenuation can lead to the production of daughter species of distinct toxicity that may pose challenges in pollution management strategies. The actual threat that these contaminants pose to human health depends on the interplay between the complex structure of the geological media and the toxicity of each pollutant byproduct. This work addresses human health risk for chemical mixtures resulting from the sequential degradation of a contaminant (such as a chlorinated solvent) under uncertainty through high-resolution three-dimensional numerical simulations. We systematically investigate the interaction between aquifer heterogeneity, flow connectivity, contaminant injection model, and chemical toxicity in the probabilistic characterization of health risk. We illustrate how chemical-specific travel times control the regime of the expected risk and its corresponding uncertainties. Results indicate conditions where preferential flow paths can favor the reduction of the overall risk of the chemical mixture. The overall human risk response to aquifer connectivity is shown to be nontrivial for multispecies transport. This nontriviality is a result of the interaction between aquifer heterogeneity and chemical toxicity. To quantify the joint effect of connectivity and toxicity in health risk, we propose a toxicity-based Damk€ohler number. Furthermore, we provide a statistical characterization in terms of low-order moments and the probability density function of the individual and total risks.