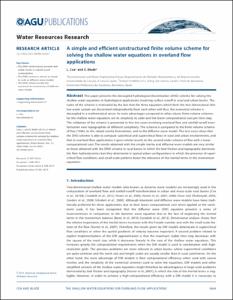 Document typeArticle
Rights accessOpen Access
All rights reserved. This work is protected by the corresponding intellectual and industrial property rights. Without prejudice to any existing legal exemptions, reproduction, distribution, public communication or transformation of this work are prohibited without permission of the copyright holder
Abstract
This paper presents the Decoupled Hydrological Discretisation (DHD) scheme for solving the shallow water equations in hydrological applications involving surface runoff in rural and urban basins. The name of the scheme is motivated by the fact that the three equations which form the two-dimensional shallow water system are discretised independently from each other and thus, the numerical scheme is decoupled in a mathematical sense. Its main advantages compared to other classic finite volume schemes for the shallow water equations are its simplicity to code and the lower computational cost per time step. The validation of the scheme is presented in five test cases involving overland flow and rainfall-runoff transformation over topographies of different complexity. The scheme is compared to the finite volume scheme ofRoe [1986], to the simple inertia formulation [Bates et al., 2010], and to the diffusive wave model. The test cases show that the DHD scheme is able to compute subcritical and supercritical flows in rural and urban environments, and that in overland flow applications it gives similar results to the second order scheme of Roe with a lower computational cost. The results obtained with the simple inertia and diffusive wave models are very similar to those obtained with the DHD scheme in rural basins in which the bed friction and topography dominate the flow hydrodynamics but they deteriorate in typical urban configurations in which the presence of supercritical flow conditions and small scale patterns boost the relevance of the inertial terms in the momentum equations.
Description
An edited version of this paper was published by AGU. Copyright (2015) American Geophysical Union.
CitationCea, L., Blade, E. A simple and efficient unstructured finite volume scheme for solving the shallow water equations in overland flow applications. "Water Resources Research", Juliol 2015, núm. 7, p. 5464-5486.
URIhttp://hdl.handle.net/2117/76558
DOI10.1002/2014WR016547
ISSN1944-7973
Publisher versionhttp://onlinelibrary.wiley.com/doi/10.1002/2014WR016547/full
Collections
Share: