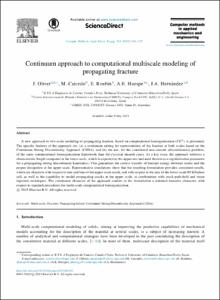 Document typeArticle
Rights accessOpen Access
Abstract
A new approach to two-scale modeling of propagating fracture, based on computational homogenization (FE2), is presented. The specific features of the approach are: a) a continuum setting for representation of the fracture at both scales based on the Continuum Strong Discontinuity Approach (CSDA), and b) the use, for the considered non-smooth (discontinuous) problem, of the same computational homogenization framework than for classical smooth cases. As a key issue, the approach retrieves a characteristic length computed at the lower scale, which is exported to the upper one and used therein as a regularization parameter for a propagating strong discontinuity kinematics. This guarantees the correct transfer of fracture energy between scales and the proper dissipation at the upper scale. Representative simulations show that the resulting formulation provides consistent results, which are objective with respect to, both, size and bias of the upper-scale mesh, and with respect to the size of the lower-scale RVE/failure cell, as well as the capability to model propagating cracks at the upper scale, in combination with crack-path-field and strain injection techniques. The continuum character of the approach confers to the formulation a minimal invasive character, with respect to standard procedures for multi-scale computational homogenization.
CitationOliver, J., Caicedo, M., Roubin , E., Huespe, A., Hernandez, J.A. Continuum approach to computational multiscale modeling of propagating fracture. "Computer methods in applied mechanics and engineering", Setembre 2015, p. 384-427.
URIhttp://hdl.handle.net/2117/76557
DOI10.1016/j.cma.2015.05.012
ISSN0045-7825
Publisher versionhttp://www.sciencedirect.com/science/article/pii/S0045782515001851
Collections
Share: