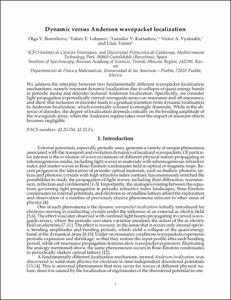 Except where otherwise noted, content on this work is licensed under a Creative Commons license : Attribution-NonCommercial-NoDerivs 3.0 Spain
Abstract
We address the interplay between two fundamentally different wavepacket localization mechanisms, namely resonant dynamic localization due to collapse of quasi-energy bands in periodic media and disorder-induced Anderson localization. Specifically, we consider light propagation in periodically curved waveguide arrays on-resonance and off-resonance, and show that inclusion of disorder leads to a gradual transition from dynamic localization to Anderson localization, which eventually is found to strongly dominate. While in the absence of disorder, the degree of localization depends critically on the bending amplitude of the waveguide array, when the Anderson regime takes over the impact of resonant effects becomes negligible.
URIhttp://hdl.handle.net/2117/76510
ISSN1050-2947
Collections
Share: