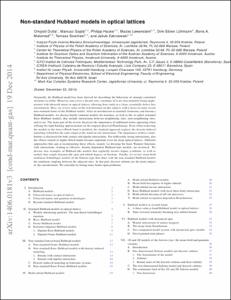 Show full item record
Dutta, Omjyoti
Gajda, Mariusz
Lewenstein, Maciej
Lühmann, Dirk-Sören
Malomed, Boris A.
Sowiński, Tomasz
Zakrzewski, Jakub
Document typeArticle
PublisherIOP
Rights accessOpen Access
Abstract
Originally, the Hubbard model was derived for describing the behavior of strongly correlated electrons in solids. However, for over a decade now, variations of it have also routinely been implemented with ultracold atoms in optical lattices, allowing their study in a clean, essentially defect-free environment. Here, we review some of the vast literature on this subject, with a focus on more recent non-standard forms of the Hubbard model. After giving an introduction to standard (fermionic and bosonic) Hubbard models, we discuss briefly common models for mixtures, as well as the so-called extended Bose–Hubbard models, that include interactions between neighboring sites, next-neighbor sites, and so on. The main part of the review discusses the importance of additional terms appearing when refining the tight-binding approximation for the original physical Hamiltonian. Even when restricting the models to the lowest Bloch band is justified, the standard approach neglects the density-induced tunneling (which has the same origin as the usual on-site interaction). The importance of these contributions is discussed for both contact and dipolar interactions. For sufficiently strong interactions, the effects related to higher Bloch bands also become important even for deep optical lattices. Different approaches that aim at incorporating these effects, mainly via dressing the basis, Wannier functions with interactions, leading to effective, density-dependent Hubbard-type models, are reviewed. We discuss also examples of Hubbard-like models that explicitly involve higher p orbitals, as well as models that dynamically couple spin and orbital degrees of freedom. Finally, we review mean-field nonlinear Schrödinger models of the Salerno type that share with the non-standard Hubbard models nonlinear coupling between the adjacent sites. In that part, discrete solitons are the main subject of consideration. We conclude by listing some open problems, to be addressed in the future.
URIhttp://hdl.handle.net/2117/76504
ISSN0034-4885
Publisher versionhttp://iopscience.iop.org/0034-4885/78/6/066001/pdf/0034-4885_78_6_066001.pdf
Collections
Share: