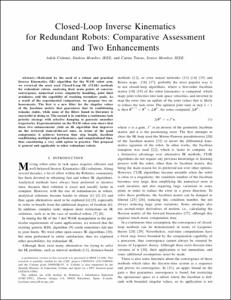 Motivated by the need of a robust and practical Inverse Kinematics (IK) algorithm for the WAM robot arm, we reviewed the most used Closed-Loop IK (CLIK) methods for redundant robots, analysing their main points of concern: convergence, numerical error, singularity handling, joint limit avoidance, and the capability of reaching secondary goals. As a result of the experimental comparison, we propose two enhancements. The first is a new filter for the singular values of the Jacobian matrix that guarantees that its conditioning remains stable, while none of the filters found in literature is successful at doing so. The second is to combine a continuous task priority strategy with selective damping to generate smoother trajectories. Experimentation on the WAM robot arm shows that these two enhancements yield an IK algorithm that improves on the reviewed state-of-the-art ones, in terms of the good compromise it achieves between time step length, Jacobian conditioning, multiple task performance, and computational time, thus constituting a very solid option in practice. This proposal is general and applicable to other redundant robots.
CitationColomé, A., Torras, C. Closed-loop inverse kinematics for redundant robots: comparative assessment and two enhancements. "IEEE-ASME transactions on mechatronics", 2015, núm. 2, p. 944-955.
URIhttp://hdl.handle.net/2117/76480
DOI10.1109/TMECH.2014.2326304
ISSN1083-4435
Publisher versionLuz/juliol/2015: revisada en base al text localitzat a http://ieeexplore.ieee.org/xpl/articleDetails.jsp?arnumber=6832645