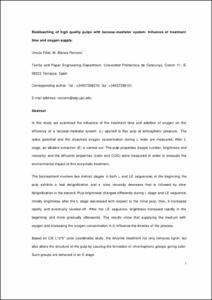 Document typeArticle
PublisherElsevier
Rights accessOpen Access
Abstract
In this study we examined the influence of the treatment time and addition of oxygen on the efficiency of a laccase mediator system (L) applied to flax pulp at atmospheric pressure. The redox potential and the dissolved oxygen concentration during L tests are measured. After L stage, an alkaline extraction (E) is carried out. The pulp properties (kappa number, brightness and viscosity) and the effluents properties (color and COD) were measured in order to evaluate the environmental impact of this enzymatic treatment. The biotreatment involves two distinct stages in both L and LE sequences; in the beginning the pulp exhibits a fast delignification and a slow viscosity decrease that is followed by slow delignification in the second. Pulp brightness changed differently during L stage and LE sequence. Initially brightness after the L stage decreased with respect to the initial pulp; then, it increased rapidly and eventually leveled off. After the LE sequence, brightness increased rapidly in the beginning and more gradually afterwards. The results show that supplying the medium with oxygen and increasing the oxygen concentration in it, influence the kinetics of the process. Based on CIE L*a*b* color coordinates study, the enzyme treatment not only removes lignin, but also alters the structure of the pulp by causing the formation of chromophoric groups giving color. Such groups are removed in an E stage
Description
Electronic version of an article published as "Biochemical engineering journal", vol. 44, no. 2-3, p.193-198
CitationFillat, Ú.; Roncero, M. B. Biobleaching of high quality pulps with laccase mediator system: influence of treatment time and oxygen supply. "Biochemical engineering journal", 2009, vol. 44, núm. 2-3, p. 193-198.
URIhttp://hdl.handle.net/2117/7645
DOI10.1016/j.bej.2008.12.002
ISSN1369-703X
Collections
Share: