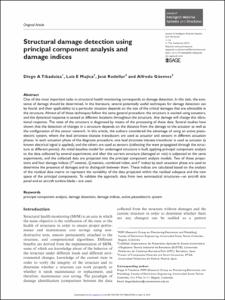 Güemes Gordo, Alfredo
Document typeArticle
Rights accessOpen Access
Abstract
One of the most important tasks in structural health monitoring corresponds to damage detection. In this task, the existence of damage should be determined. In the literature, several potentially useful techniques for damage detection can be found, and their applicability to a particular situation depends on the size of the critical damages that are admissible in the structure. Almost all of these techniques follow the same general procedure: the structure is excited using actuators, and the dynamical response is sensed at different locations throughout the structure. Any damage will change this vibrational response. The state of the structure is diagnosed by means of the processing of these data. Several studies have shown that the detection of changes in a structure depends on the distance from the damage to the actuator as well as the configuration of the sensor network. In this article, the authors considered the advantage of using an active piezoelectric system, where the lead zirconate titanate transducers are used as actuator and sensors in different actuation phases. In each actuation phase of the diagnosis procedure, one lead zirconate titanate transducer is used as actuator (a known electrical signal is applied), and the others are used as sensors (collecting the wave propagated through the structure at different points). An initial baseline model for undamaged structure is built applying principal component analysis to the data collected by several experiments and after the current structure (damaged or not) is subjected to the same experiments, and the collected data are projected into the principal component analysis models. Two of these projections and four damage indices (T2-statistic, Q-statistic, combined index, and I2 index) by each actuation phase are used to determine the presence of damages and to distinguish between them. These indices are calculated based on the analysis of the residual data matrix to represent the variability of the data projected within the residual subspace and the new space of the principal components. To validate the approach, data from two aeronautical structures—an aircraft skin panel and an aircraft turbine blade—are used.
CitationTibaduiza, D.A., Mujica, L.E., Rodellar, J., Güemes, A. Structural damage detection using principal component analysis and damage indices. "Journal of intelligent material systems and structures", 08 Gener 2015.
URIhttp://hdl.handle.net/2117/76413
DOI10.1177/1045389X14566520
ISSN1045-389X
Publisher versionhttp://jim.sagepub.com/content/early/2015/01/06/1045389X14566520.abstract
Collections
Share: