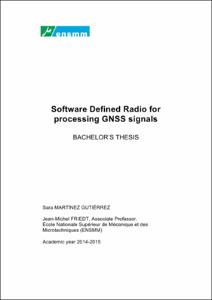 Show full item record
Martinez Gutierrez, Sara
Tutor / directorFriedt, Jean-Michel
CovenanteeÉcole nationale supérieure de mécanique et des microtechniques
Document typeBachelor thesis
Rights accessOpen Access
All rights reserved. This work is protected by the corresponding intellectual and industrial property rights. Without prejudice to any existing legal exemptions, reproduction, distribution, public communication or transformation of this work are prohibited without permission of the copyright holder
Abstract
GPS satellites are fitted with atomic clocks, in which it relapses the main objective of this project, to recover some of their accuracy and stability on a ground based receiver. This project describes the fundamentals of GPS signals, the assembly of the installation implemented to process them in software and the corresponding experiments. In order to achieve the software processing, a USB DVB-T dongle is connected to an active antenna and to the computer. As mentioned, one of the purposes is also to understand how a GPS can be implemented by software as a the substitution of a big part of the hardware that makes it impenetrable, as they are black boxes of integrated circuits, and expensive. It is known that a Global Navigation Satellite System (GNSS) software-defined open source receiver has already been created by people in Barcelona in “Centre Tecnològic de Telecomunicacions de Catalunya (CTTC)”, a testbed for GNSS signal processing since it can be customized in every way. It has been used at some intermediate steps of the study while executing parallel experiments in the course of understanding how a GPS signal is digitally processed. In the meantime, some experiments have also been performed only employing hardware before implementing them in software, so that the concepts are visually reflected. When realizing software experiments, an interface called GNURadio has been used because of its enormous implementation of signal processing blocks. GNURadio can be used with external RF hardware to create software-defined radios, or without hardware in a simulation-like environment. Nevertheless, various simulations in the GNU (Octave software environment) have also been executed as processing in real time has not been considered a goal. However, to successfully accomplish the demodulation of the navigation data, which will contribute to restore the accuracy and stability of the satellites clocks that have sent it, the carrier frequency needs to be perfectly recovered, being this last point where the final aim of the project falls on.
SubjectsGlobal Positioning System, Signal processing -- Computer programs, Sistema de posicionament global, Tractament del senyal – Programes d’ordinador, GNSS (Sistema de navegació)
URIhttp://hdl.handle.net/2117/76408
Collections
Share: