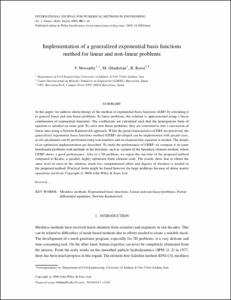 In this paper, we address shortcomings of the method of exponential basis functions (EBF) by extending it to general linear and non-linear problems. In linear problems, the solution is approximated using a linear combination of exponential functions. The coefficients are calculated such that the homogenous form of equation is satisfied on some grid. To solve non-linear problems, they are converted to into a succession of linear ones using a Newton-Kantorovich approach. The generalized exponential basis functions method (GEBF) developed can be implemented with greater ease compared to EBF, as all calculations can be performed using real numbers and no characteristic equation is needed. The details of an optimized implementation are described. We compare GEBF on some benchmark problems with methods in the literature, such as variants of the boundary element method, where GEBF shows a good performance. Also in a 3D problem, we report the run time of the proposed method compared to Kratos, a parallel, highly optimized finite element code. The results show that in this example, to obtain the same level of error much less computational effort is needed in the proposed method. Practical limitations might be encountered however for large problems because of dense matrix operations involved.