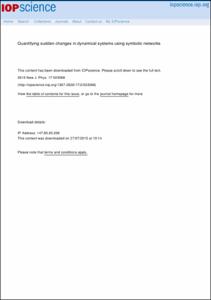 We characterize the evolution of a dynamical system by combining two well-known complex systems' tools, namely, symbolic ordinal analysis and networks. From the ordinal representation of a time series we construct a network in which every node weight represents the probability of an ordinal pattern (OP) to appear in the symbolic sequence and each edge's weight represents the probability of transitions between two consecutive OPs. Several network-based diagnostics are then proposed to characterize the dynamics of different systems: logistic, tent, and circle maps. We show that these diagnostics are able to capture changes produced in the dynamics as a control parameter is varied. We also apply our new measures to empirical data from semiconductor lasers and show that they are able to anticipate the polarization switchings, thus providing early warning signals of abrupt transitions.
CitationMasoller, C., Hong, Y., Ayad, S., Gustave, F., Barland, S., Pons, A. J., Gómez, S., Arenas, A. Quantifying sudden changes in dynamical systems using symbolic networks. "New journal of physics", 24 Febrer 2015, núm. 2.
URIhttp://hdl.handle.net/2117/76333
DOI10.1088/1367-2630/17/2/023068
ISSN1367-2630
Publisher versionhttp://iopscience.iop.org/1367-2630/17/2/023068/