Relationship between tuberculosis and lung cancer and its metastatic cancers in Taiwan: a semi-Markov analysis 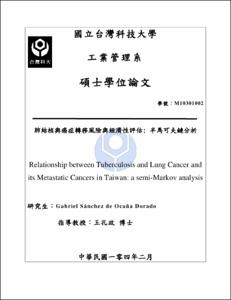 The current situation in Taiwan is not optimistic regarding the Department of Public Health expenses. The gratuitousness of the system promotes an abusive consumption by the population. The aims of this study are: to find the connection between common diseases, such as rheumatoid arthritis and diabetes, pulmonary diseases, such as pulmonary tuberculosis, and lung cancer and its most common metastatic cancers and to make an estimate of the total costs of the medical treatment based on data from the database, depending on the disease treated to help make predictions. To do so, the first step was gathering the data from the National Health Insurance Database (NHIDB), where patient’s medical data is recorded and diseases are encoded following the ICD9 codes. The initial and final dates of the disease were also obtained (first and last visit with the same ICD9 code), as well as the age, sex and other useful data. Thereafter, transition times were calculated. Owing to the high number of data missing (especially patient’s death status) some hypotheses were necessary to be assumed and affected the transition time calculations. Due to the lack of data for some diseases, three of the initial proposal were eliminated and the final sample of population was of 417 patients with a total of 773 transitions in the model. Once the data was gathered, the semi-Markov model was built. It contained 9 states including health and death and all the possible connections between them. Using the semi-Markov package of the R studio program and the transition times calculated from the NHIDB, time dependent transition probabilities were obtained. At the same time, a model tree was built on the TreeAge program in order to simulate using the transition probabilities. A transient and a steady states simulation were run. The results were not as expected for the long term simulation due to an alteration of the Markov process. Regarding the short term simulation, mean time and cost results were obtained and analyzed. To conclude, based on the results obtained, this model can be used to simulate and predict virtual patients for short term simulations (one year). Long term simulation cannot be run using time dependent transition probabilities in such a big model (nine states) because simulated patients tend to remain in the model.
SubjectsLungs – Diseases, Lungs -- Cancer, Markov processes, Pulmons -- Malalties, Pulmons – Càncer, Markov, Processos de