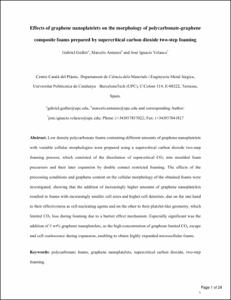 Low density polycarbonate foams containing different amounts of graphene nanoplatelets with variable cellular morphologies were prepared using a supercritical carbon dioxide two-step foaming process, which consisted of the dissolution of supercritical CO2 into moulded foam precursors and their later expansion by double contact restricted foaming. The effects of the processing conditions and graphene content on the cellular morphology of the obtained foams were investigated, showing that the addition of increasingly higher amounts of graphene nanoplatelets resulted in foams with increasingly smaller cell sizes and higher cell densities, due on the one hand to their effectiveness as cell nucleating agents and on the other to their platelet-like geometry, which limited CO2 loss during foaming due to a barrier effect mechanism. Especially significant was the addition of 5 wt.% graphene nanoplatelets, as the high concentration of graphene limited CO2 escape and cell coalescence during expansion, enabling to obtain highly expanded microcellular foams.
CitationGedler, G., De Sousa Pais, M., Velasco J.I. Effects of graphene nanoplatelets on the morphology of polycarbonate-graphene composite foams prepared by supercritical carbon dioxide two-step foaming. "The Journal of supercritical fluids", Maig 2015, p. 167-174.
URIhttp://hdl.handle.net/2117/76246
DOI10.1016/j.supflu.2015.02.005
ISSN0896-8446
Publisher versionhttp://www.sciencedirect.com/science/article/pii/S0896844615000662