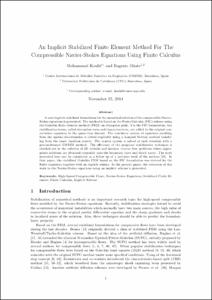 Document typeArticle
Rights accessOpen Access
All rights reserved. This work is protected by the corresponding intellectual and industrial property rights. Without prejudice to any existing legal exemptions, reproduction, distribution, public communication or transformation of this work are prohibited without permission of the copyright holder
Abstract
A new implicit stabilized formulation for the numerical solution of the compressible Navier-Stokes equations is presented. The method is based on the finite calculus (FIC) scheme using the Galerkin finite element method (FEM) on triangular grids. Via the FIC formulation, two stabilization terms, called streamline term and transverse term, are added to the original conservation equations in the space-time domain. The non-linear system of equations resulting from the spatial discretization is solved implicitly using a damped Newton method benefiting from the exact Jacobian matrix. The matrix system is solved at each iteration with a preconditioned GMRES method. The efficiency of the proposed stabilization technique is checked out in the solution of 2D inviscid and laminar viscous flow problems where appropriate solutions are obtained especially near the boundary layer and shock waves. The work presented here can be considered as a follow up of a previous work of the authors Kouhi, Oate (Int J Numer Methods Fluids 74:872-897, 2014). In that paper, the stabilized Galerkin FEM based on the FIC formulation was derived for the Euler equations together with an explicit scheme. In the present paper, the extension of this work to the Navier-Stokes equations using an implicit scheme is presented.
CitationKouhi, M., Oñate, E. An implicit stabilized finite element method for the compressible Navier-Stokes equations using finite calculus. "Computational Mechanics", Juliol 2015, núm. 1, The final publication is available at Springer via http://dx.doi.org/10.1007/s00466-015-1161-2, p. 113-129.
URIhttp://hdl.handle.net/2117/76192
DOI10.1007/s00466-015-1161-2
ISSN0178-7675
Publisher versionhttp://link.springer.com/article/10.1007/s00466-015-1161-2/fulltext.html
Collections
Share: