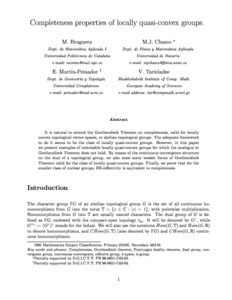 Chasco Ugarte, Maria Jesús
Martín Peinador, Elena
Tarieladze, V. I. (Vazha Izemovich)
Document typeArticle
Rights accessOpen Access
Abstract
It is natural to extend the Grothendieck Theorem on completeness, valid for locally convex topological vector spaces, to abelian topological groups. The adequate framework to do it seems to be the class of locally quasi-convex groups. However, in this paper we present examples of metrizable locally quasi-convex groups for which the analogue to Grothendieck Theorem does not hold. By means of the continuous convergence structure on the dual of a topological group, we also state some weaker forms of Grothendieck Theorem valid for the class of locally quasi-convex groups. Finally, we prove that for the smaller class of nuclear groups, BB-reflexivity is equivalent to completeness.
URIhttp://hdl.handle.net/2117/760
Collections
Share: