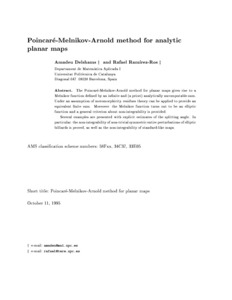 Document typeArticle
Rights accessOpen Access
Abstract
The Poincare-Melnikov-Arnold method for planar maps gives rise to a Melnikov function defined by an infinite and (a priori) analytically uncomputable sum. Under an assumption of meromorphicity, residues theory can be applied to provide an equivalent finite sum. Moreover, the Melnikov function turns out to be an elliptic function and a general criterion about non-integrability is provided. Several examples are presented with explicit estimates of the splitting angle. In particular, the non-integrability of non-trivial symmetric entire perturbations of elliptic billiards is proved, as well as the non-integrability of standard-like maps.
URIhttp://hdl.handle.net/2117/758
Collections
Share: