Numerical modelling of the seismic response of buildings with energy dissipators 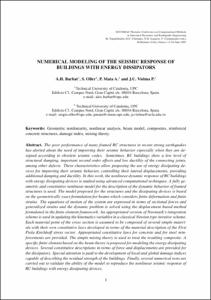 The poor performance of many framed RC structures in recent strong earthquakes has alerted about the need of improving their seismic behavior especially when they are designed according to obsolete seismic codes. Sometimes, RC buildings show a low level of structural damping, important second order effects and low ductility of the connecting joints, among other defects. These characteristics allow proposing the use of energy dissipating devices for improving their seismic behavior, controlling their lateral displacements, providing additional damping and ductility. In this work, the nonlinear dynamic response of RC buildings with energy dissipating devices is studied using advanced computational techniques. A fully geometric and constitutive nonlinear model for the description of the dynamic behavior of framed structures is used. The model proposed for the structures and the dissipating devices is based on the geometrically exact formulation for beams which considers finite deformation and finite strains. The equations of motion of the system are expressed in terms of sectional forces and generalized strains and the dynamic problem is solved using the displacement based method formulated in the finite element framework. An appropriated version of Newmark’s integration scheme is used in updating the kinematics variables in a classical Newton type iterative scheme. Each material point of the cross section is assumed to be composed of several simple materials with their own constitutive laws developed in terms of the material description of the First Piola Kirchhoff stress vector. Appropriated constitutive laws for concrete and for steel reinforcements are provided. The simple mixing theory is used to treat the resulting composite. A specific finite element based on the beam theory is proposed for modeling the energy dissipating devices. Several constitutive descriptions in terms of force and displacements are provided for the dissipators. Special attention is paid to the development of local and global damage indices capable of describing the residual strength of the buildings. Finally, several numerical tests are carried out to validate the ability of the model to reproduce the nonlinear seismic response of RC buildings with energy dissipating devices.
CitationBarbat, H. [et al.]. Numerical modelling of the seismic response of buildings with energy dissipators. A: Computational Methods in Structural Dynamics and Earthquake Engineering. "COMPDYN 2007: Computational Methods in Structural Dynamics and Earthquake Engineering". Rethymno, Creta: 2007, p. 1-12.
URIhttp://hdl.handle.net/2117/7576