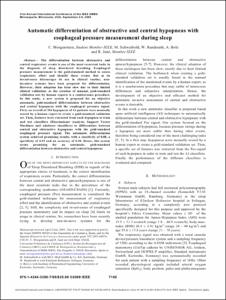 Document typeConference report
Rights accessOpen Access
All rights reserved. This work is protected by the corresponding intellectual and industrial property rights. Without prejudice to any existing legal exemptions, reproduction, distribution, public communication or transformation of this work are prohibited without permission of the copyright holder
Abstract
The differentiation between obstructive and central respiratory events is one of the most recurrent tasks in the diagnosis of sleep disordered breathing. Esophageal pressure measurement is the gold-standard method to assess respiratory effort and identify these events. But as its invasiveness discourages its use in clinical routine, noninvasisve systems have been proposed for differentiation. However, their adoption has been slow due to their limited clinical validation, as the creation of manual, gold-standard validation sets by human experts is a cumbersome procedure. In this study, a new system is proposed for an objective automatic, gold-standard differentiation between obstructive and central hypopneas with the esophageal pressure signal. First, an overall of 356 hypopneas of 16 patients were manually scored by a human expert to create a gold-standard validation set. Then, features were extracted from each hypopnea to train and test classifiers (Discriminant Analysis, Support Vector Machines and adaboost classifiers) to differentiate between central and obstructive hypopneas with the gold-standard esophageal pressure signal. The automatic differentiation system achieved promising results, with a sensitivity of 0.88, a specificity of 0.93 and an accuracy of 0.90. Hence, this system seems promising for an automatic, gold-standard differentiation between obstructive and central hypopneas.
CitationMorgenstern, C.R. [et al.]. Automatic differentiation of obstructive and central hypopneas with esophageal pressure measurement during sleep. A: IEEE Engineering in Medicine and Biology Society. Conference. "31st Annual International Conference of the IEEE Engineering in Medicine and Biology Society". Minneapolis, Minnesota: 2009, p. 7102-7105.
URIhttp://hdl.handle.net/2117/7535
DOI10.1109/IEMBS.2009.5332900
ISBN978-1-4244-3296-7/09
Publisher versionhttp://ieeexplore.ieee.org/search/freesrchabstract.jsp?tp=&arnumber=5332900&queryText%3Dmorgenstern+c%26openedRefinements%3D*%26searchField%3DSearch+All
Collections
Share: