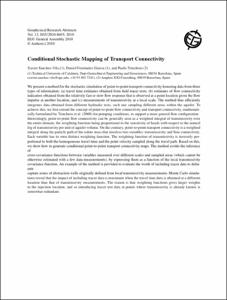 Trinchero, Paolo
Document typeConference report
Rights accessOpen Access
Abstract
We present a method for the stochastic simulation of point-to-point transport connectivity honoring data from three types of information: (a) travel time estimates obtained from field tracer tests; (b) estimates of flow connectivity indicators obtained from the relatively fast or slow flow response that is observed at a point location given the flow impulse at another location; and (c) measurements of transmissivity at a local scale. The method thus efficiently integrates data obtained from different hydraulic tests, each one sampling different areas within the aquifer. To achieve this, we first extend the concept of point-to-point flow connectivity and transport connectivity, mathematically formulated by Trinchero et al. (2008) for pumping conditions, to support a more general flow configuration. Interestingly, point-to-point flow connectivity can be generally seen as a weighted integral of transmissivity over the entire domain, the weighting function being proportional to the sensitivity of heads with respect to the natural log of transmissivity per unit of aquifer volume. On the contrary, point-to-point transport connectivity is a weighted integral along the particle path of the solute mass that involves two variables: transmissivity and flow connectivity. Each variable has its own distinct weighting function. The weighting function of transmissivity is inversely proportional to both the homogeneous travel time and the point velocity sampled along the travel path. Based on this, we show how to generate conditional point-to-point transport connectivity maps. The method avoids the inference of cross-covariance functions between variables measured over different scales and sampled areas (which cannot be otherwise estimated with a few data measurements), by expressing them as a function of the local transmissivity covariance function. An example of the method is provided to evaluate the worth of including tracer data to delineate capture zones of abstraction wells originally defined from local transmissivity measurements. Monte Carlo simulations reveal that the impact of including tracer data is maximum when the travel time data is obtained at a different location than that of transmissivity measurements. The reason is that weighting functions gives larger weights to the injection location, and so introducing tracer test data at points where transmissivity is already known is somewhat redundant.
CitationSanchez, F.; Fernandez, D.; Trinchero, P. Conditional stochastic mapping of transport connectivity. A: EGU General Assembly. "EGU General Assembly 2010". Viena: 2010, p. 1.
URIhttp://hdl.handle.net/2117/7532
Publisher versionhttp://meetings.copernicus.org/egu2010/home.html
Collections
Share: