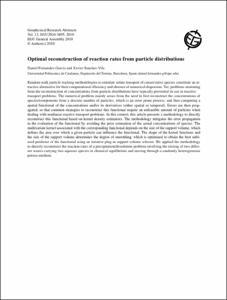 Document typeConference report
Rights accessOpen Access
All rights reserved. This work is protected by the corresponding intellectual and industrial property rights. Without prejudice to any existing legal exemptions, reproduction, distribution, public communication or transformation of this work are prohibited without permission of the copyright holder
Abstract
Random walk particle tracking methodologies to simulate solute transport of conservative species constitute an attractive alternative for their computational efficiency and absence of numerical dispersion. Yet, problems stemming from the reconstruction of concentrations from particle distributions have typically prevented its use in reactive transport problems. The numerical problem mainly arises from the need to first reconstruct the concentrations of species/components from a discrete number of particles, which is an error prone process, and then computing a spatial functional of the concentrations and/or its derivatives (either spatial or temporal). Errors are then propagated, so that common strategies to reconstruct this functional require an unfeasible amount of particles when dealing with nonlinear reactive transport problems. In this context, this article presents a methodology to directly reconstruct this functional based on kernel density estimators. The methodology mitigates the error propagation in the evaluation of the functional by avoiding the prior estimation of the actual concentrations of species. The multivariate kernel associated with the corresponding functional depends on the size of the support volume, which defines the area over which a given particle can influence the functional. The shape of the kernel functions and the size of the support volume determines the degree of smoothing, which is optimized to obtain the best unbiased predictor of the functional using an iterative plug-in support volume selector. We applied the methodology to directly reconstruct the reaction rates of a precipitation/dissolution problem involving the mixing of two different waters carrying two aqueous species in chemical equilibrium and moving through a randomly heterogeneous porous medium.
CitationFernandez, D.; Sanchez, F. Optimal reconstruction of reaction rates from particles distributions. A: EGU General Assembly. "EGU General Assembly 2010". Viena: 2010, p. 1.
URIhttp://hdl.handle.net/2117/7530
Publisher versionhttp://meetings.copernicus.org/egu2010/home.html
Collections
Share: