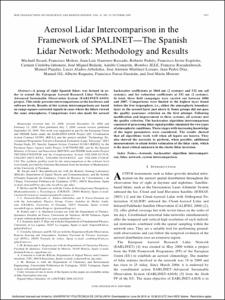 Abstract—A group of eight Spanish lidars was formed in order to extend the European Aerosol Research Lidar Network–Advanced Sustainable Observation System (EARLINET-ASOS)project. This study presents intercomparisons at the hardware and software levels. Results of the system intercomparisons are based on range-square-corrected signals in cases where the lidars viewed the same atmospheres. Comparisons were also made for aeros backscatter coefficients at 1064 nm (2 systems) and 532 nm (all systems), and for extinction coefficients at 532 nm (2 systems). In total, three field campaigns were carried out between 2006 and 2007. Comparisons were limited to the highest layer found before the free troposphere, i.e., either the atmospheric boundary layer or the aerosol layer just above it. Some groups did not pass the quality assurance criterion on the first attempt. Following modification and improvement to these systems, all systems met the quality criterion. The backscatter algorithm intercomparison consisted of processing lidar signal profiles simulated for two types of atmospheric conditions. Three stages with increasing knowledge of the input parameters were considered. The results showed that all algorithms work well when all inputs are known. They also showed the necessity to perform, when possible, additional measurements to attain better estimation of the lidar ratio, which is the most critical unknown in the elastic lidar inversion.
CitationSicard, M. [et al.]. Aerosol lidar intercomparison in the framework of SPALINET-The Spanish lidar network: methodology and results. "IEEE transactions on geoscience and remote sensing", Octubre 2009, vol. 47, núm. 10, p. 3547-3559.
URIhttp://hdl.handle.net/2117/7521
DOI10.1109/TGRS.2009.2021525
ISSN0196-2892