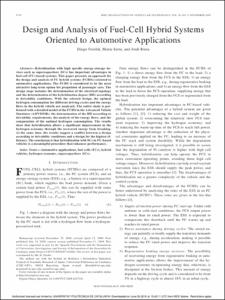 Document typeArticle
Rights accessOpen Access
All rights reserved. This work is protected by the corresponding intellectual and industrial property rights. Without prejudice to any existing legal exemptions, reproduction, distribution, public communication or transformation of this work are prohibited without permission of the copyright holder
Abstract
Hybridization with high specific energy-storage devices such as supercapacitors (SCs) has important advantages in fuel-cell (FC)-based systems. This paper presents an approach for the design and analysis of FC hybrid systems (FCHSs) oriented to automotive applications. The FCHS is considered to be the most attractive long-term option for propulsion of passenger cars. The design stage includes the determination of the electrical topology and the determination of the hybridization degree (HD) according to drivability conditions. With the selected design, the optimal hydrogen consumption for different driving cycles and the energy flows in the hybrid vehicle are analyzed. The entire study is performed with a detailedmodel of the FCHS in the Advanced Vehicle Simulator (ADVISOR): the determination of the HD according to drivability requirements, the analysis of the energy flows, and the computation of the optimal hydrogen consumption. The results show that hybridization allows a significant improvement in the hydrogen economy through the recovered energy from breaking. At the same time, the results suggest a conflict between a design according to drivability conditions and a design for the highest efficiency. The conclusion is that hybridization with SCs in FC-based vehicles is a meaningful procedure that enhances performance.
CitationFeroldi, D.; Serra, M.; Riera, J. Design and analysis of fuel-cell hybrid systems oriented to automotive applications. "IEEE transactions on vehicular technology", Novembre 2009, vol. 58, núm. 9, p. 4720-4729.
URIhttp://hdl.handle.net/2117/7505
DOI10.1109/TVT.2009.2027241
ISSN0018-9545
Publisher versionhttp://ieeexplore.ieee.org/search/srchabstract.jsp?arnumber=5164960&isnumber=5307285&punumber=25&k2dockey=5164960@ieeejrns&query=5164960%3Cin%3Earnumber&pos=0&tag=1
Collections
Share: