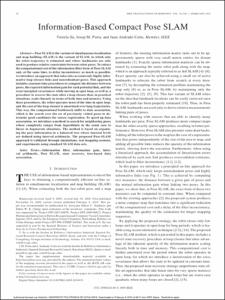 Document typeArticle
Rights accessOpen Access
Abstract
Pose SLAMis the variant of simultaneous localization and map building (SLAM) is the variant of SLAM, in which only the robot trajectory is estimated and where landmarks are only used to produce relative constraints between robot poses. To reduce the computational cost of the information filter form of PoseSLAM and, at the same time, to delay inconsistency as much as possible, we introduce an approach that takes into account only highly informative loop-closure links and nonredundant poses. This approach includes constant time procedures to compute the distance between poses, the expected information gain for each potential link, and the exact marginal covariances while moving in open loop, as well as a procedure to recover the state after a loop closure that, in practical situations, scales linearly in terms of both time and memory. Using these procedures, the robot operates most of the time in open loop, and the cost of the loop closure is amortized over long trajectories. This way, the computational bottleneck shifts to data association, which is the search over the set of previously visited poses to determine good candidates for sensor registration. To speed up data association, we introduce a method to search for neighboring poses whose complexity ranges from logarithmic in the usual case to linear in degenerate situations. The method is based on organizing the pose information in a balanced tree whose internal levels are defined using interval arithmetic. The proposed Pose-SLAM approach is validated through simulations, real mapping sessions, and experiments using standard SLAM data sets.
CitationIla, V.; Porta, J.; Andrade-Cetto, J. Information-based compact Pose SLAM. "IEEE transactions on robotics", 2010, vol. 26, núm. 1, p. 78-93.
URIhttp://hdl.handle.net/2117/7495
DOI10.1109/TRO.2009.2034435
ISSN1552-3098
Publisher versionhttp://dx.doi.org/10.1109/TRO.2009.2034435
Collections
Share: