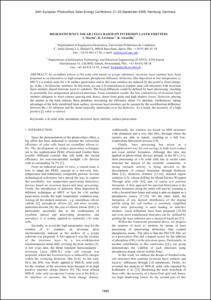 Document typeConference lecture
Rights accessOpen Access
Abstract
In crystalline silicon (c-Si) solar cells based on p-type substrates, inversion layer emitters have been proposed as an alternative to high-temperature phosphorus diffusion. Dielectric film deposition at low temperature (≤400 ºC) is widely used for c-Si surface passivation and in this case emitters are induced by the positive fixed charge,Qf, at the c-Si/dielectric interface. In this work, we use 2-D simulations to explore solar cell structures with inversion layer emitters placed between local n+-emitters. The local diffusions could be defined by laser processing, resulting in potentially low-temperature processed structures. From simulation results, the low conductivity of inversion layer emitters obligates to short contact spacing and, hence, dense front grids and high shadow losses. However, placing the emitter at the back reduces these penalties, increasing the efficiency about 1% absolute. Furthermore, taking advantage of the fully metallized back surface, inversion layer emitters can be assisted by the workfunction difference between the c-Si substrate and the metal (typically aluminum) over the dielectric. As a result, the necessity of a high positive Qf value is relaxed.
CitationMartin, I.; Lövblom, R.; Alcubilla, R. High-efficiency solar cells based on inversion layer emitters. A: European Photovoltaic Solar Energy Conference. "24th European Photovoltaic Solar Energy Conference & Exhibition". Hamburgo: 2009, p. 1985-1991.
URIhttp://hdl.handle.net/2117/7489
ISBN3-936338-25-6
Publisher versionhttps://www.eupvsec-proceedings.com/proceedings?paper=4713
Collections
Share: