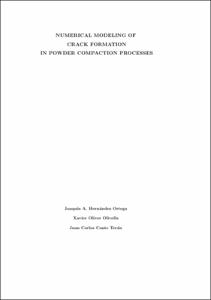 Except where otherwise noted, content on this work is licensed under a Creative Commons license : Attribution-NonCommercial-NoDerivs 3.0 Spain
Abstract
Powder metallurgy (P/M) is an important technique of manufacturing metal parts from metal in powdered form. Traditionally, P/M processes and products have been designed and developed on the basis of practical rules and trial-and-error experience. However, this trend is progressively changing. In recent years, the growing efficiencies of computers, together with the recognition of numerical simulation techniques, and more specifically, the finite element method , as powerful alternatives to these costly trial-and-error procedures, have fueled the interest of the P/M industry in this modeling technology. Research efforts have been devoted mainly to the analysis of the pressing stage and, as a result, considerable progress has been made in the field of density predictions. However, the numerical simulation of the ejection stage, and in particular, the study of the formation of cracks caused by elastic expansion and/or interaction with the tool set during this phase, has received less attention, notwithstanding its extreme relevance in the quality of the final product. The primary objective of this work is precisely to fill this gap by developing a constitutive model that attempts to describe the mechanical behavior of the powder during both pressing and ejection phases, with special emphasis on the representation of the cracking phenomenon. The constitutive relationships are derived within the general framework of rate-independent, isotropic, finite strain elastoplasticity. The yield function is defined in stress space by three surfaces intersecting nonsmoothly, namely, an elliptical cap and two classical Von Mises and Drucker-Prager yield surfaces. The distinct irreversible processes occurring at the microscopic level are macroscopically described in terms of two internal variables: an internal hardening variable, associated with accumulated compressive (plastic) strains, and an internal softening variable, linked with accumulated (plastic) shear strains. The innovative part of our modeling approach is connected mainly with the characterization of the latter phenomenological aspect: strain softening. Incorporation of a softening law permits the representation of macroscopic cracks as high gradients of inelastic strains (strain localization). Motivated by both numerical and physical reasons, a parabolic plastic potential function is introduced to describe the plastic flow on the linear Drucker-Prager failure surface. A thermodynamically consistent calibration procedure is employed to relate material parameters involved in the softening law to fracture energy values obtained experimentally on Distaloy AE specimens. The discussion of the algorithmic implementation of the model is confined exclusively to the time integration of the constitutive equations. Motivated by computational robustness considerations, a non-conventional integration scheme that combines advantageous features of both implicit and explicit method is employed. The basic ideas and assumptions underlying this method are presented, and the stress update and the closed-form expression of the algorithmic tangent moduli stemming from this method are derived. This integration scheme involves, in turn, the solution at each time increment of the system of equations stemming from a classical, implicit backward-Euler difference scheme. An iterative procedure based on the decoupling of the evolution equations for the plastic strains and the internal variables is proposed for solving these return-mapping equations. It is proved that this apparently novel method converges unconditionally to the solution regardless of the value of the material properties. To validate the proposed model, a comparison between experimental results of diametral compression tests and finite element predictions is carried out. The validation is completed with the study of the formation of cracks due to elastic expansion during ejection of an overdensified thin cylindrical part. Both simulations demonstrate the ability of the model to detect evidence of macroscopic cracks, clarify and provide reasons for the formation of such cracks, and evaluate qualitatively the influence of variations in the input variables on their propagation. Besides, in order to explore the possibilities of the numerical model as a tool for assisting in the design and analysis of P/M uniaxial die compaction (including ejection) processes, a detailed case study of the compaction of an axially symmetric multilevel part in an advanced CNC press machine is performed. Special importance is given in this study to the accurate modeling of the geometry of the tool set and the external actions acting on it (punch platen motions). Finally, the potential areas for future research are identified.
CitationHernández, J.A.; Oliver, J.; Cante, J. "Numerical modeling of crack formation in power compaction processes". Universitat Politècnica de Catalunya. Centre Internacional de Mètodes Numèrics en Enginyeria (CIMNE), 2009. ISBN 978-84-96736-79-5.
URIhttp://hdl.handle.net/2117/7446
ISBN978-84-96736-79-5
Collections
Share: