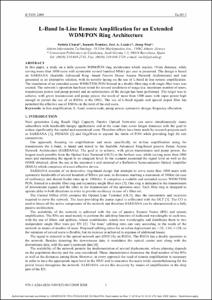 In this paper, a study on a fully passive WDM/PON ring architecture which reaches 19 km distance, while serving more than 1000 users with symmetric several hundred Mbit/s per user is presented. The design is based on SARDANA (Scalable Advanced Ring -based Passive Dense Access Network Architecture) and was generated as an alternative solution, with its novelty laying on the use of L-band in line remote amplification. The simulation of an extended access WDM/TDM PON formed in a double fibre ring with single fiber trees was created. The network’s operation has been tested for several conditions of usage (i.e. maximum number of users,transmission power and pump power) and an optimization of the design has been performed. The target was to achieve, with given transmission and pump power, the reach of more then 1000 users with input power high enough to permit the use of an RSOA at the ONU. The use of L-band signals and special doped fiber has permitted the effective use of RSOAs in the total of the end users.
CitationChatzi, S. [et al.]. L-band in-line remote amplification for an extended WDM/PON ring architecture. A: International Conference on Transparent Optical Networks. "11th International Conference on Transparent Optical Networks, 2009". Sao Miguel (Azores): IEEE Press. Institute of Electrical and Electronics Engineers, 2009, p. 865-868.
URIhttp://hdl.handle.net/2117/7306
DLIEEE Catalog Number: CFP09485-CDR
ISBN978-1-4244-4826-5
Publisher versionhttp://ieeexplore.ieee.org/stamp/stamp.jsp?arnumber=05185151