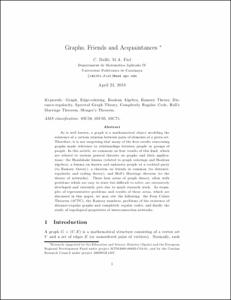 Document typeExternal research report
Rights accessOpen Access
European Commission's projectCONNECT - Combinatorics of Networks and Computation (EC-H2020-734922)
Abstract
As is well known, a graph is a mathematical object modeling the existence of a certain relation between pairs of elements of a given set. Therefore, it is not surprising that many of the first results concerning graphs made reference to relationships between people or groups of people. In this article, we comment on four results of this kind, which are related to various general theories on graphs and their applications: the Handshake lemma (related to graph colorings and Boolean algebra), a lemma on known and unknown people at a cocktail party (to Ramsey theory), a theorem on friends in common (to distanceregularity and coding theory), and Hall’s Marriage theorem (to the theory of networks). These four areas of graph theory, often with problems which are easy to state but difficult to solve, are extensively developed and currently give rise to much research work. As examples of representative problems and results of these areas, which are discussed in this paper, we may cite the following: the Four Colors Theorem (4CTC), the Ramsey numbers, problems of the existence of distance-regular graphs and completely regular codes, and finally the study of topological proprieties of interconnection networks.
URIhttp://hdl.handle.net/2117/7159
Collections
Share: