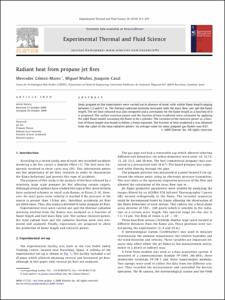 Document typeArticle
Rights accessOpen Access
Abstract
Sonic propane jet fire experiments were carried out in absence of wind, with visible flame length ranging between 2.2 and 8.1 m. The thermal radiation intensity increased with the mass flow rate and the flame length. The net heat released was also computed and a correlation for the flame length as a function of Q is proposed. The surface emissive power and the fraction of heat irradiated were estimated by applying the solid flame model, assuming the flame to be a cylinder. The variation of the emissive power as a function of flame length was found to follow a linear equation. The fraction of heat irradiated η was obtained from the value of the total radiative power; its average value for sonic propane gas flames was 0.07.
CitationGómez, M.; Muñoz, M.; Casal, J. Radiant heat from propane jet fires. "Experimental thermal and fluid science", 2010, vol. 34, núm. 3, p. 323-329.
URIhttp://hdl.handle.net/2117/7144
DOI10.1016/j.expthermflusci.2009.10.024
ISSN0894-1777
Collections
Share: