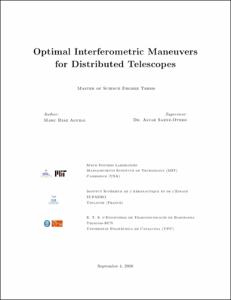 The scienti c community has proposed several missions to expand our knowledge about the universe, its formation and search for distant Earth-like planets. Most of the present space-based observation missions have reached angular resolution limits, therefore the potential bene ts concerning angular resolution and intensity that can be reaped from the realization of interferometry within a distributed satellite telescope have led to the proposal of several multi-spacecraft systems. Among these missions synthetic imaging space based interferometers, consisting of multiple telescope apertures ying in controlled formation in order to combine received information from each of the otilla members are nowadays the subject of interesting research. The objective of synthesizing images with high angular resolution, low ambiguity and high intensity is always a tradeo with the whole fuel consumption of the mission. As a consequence, this research focuses on the design of interferometric maneuvers and optimal interferometric controllers balancing image performance and energy consumption. The rest part of the thesis presents the optimization and design process of coordinated spiral maneuvers due to their interferometric interest when lling the frequency plane of the observed image. On the other hand, the second part of this work focuses in the resolution of an optimal control problem within the LQ framework, to determine the optimal imaging recon gurations of a formation ying system. Its objective is to balance the quality of the celestial observation and the usage of fuel, which are the key aspects of any space-based observation mission. This study concerning implementability and performance of interferometric maneuvers will lead towards the enlargement of mission lifetime and exibility of the system conserving acceptable quality observations.
URIhttp://hdl.handle.net/2117/6989
URL other repositoryhttp://ssl.mit.edu/spheres/library/master_thesis_reportSSLMarcDiazAguilo.pdf