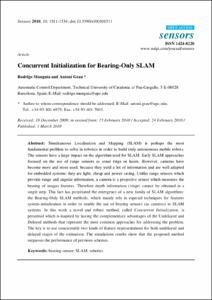 Document typeArticle
Rights accessOpen Access
Abstract
Simultaneous Localization and Mapping (SLAM) is perhaps the most fundamental problem to solve in robotics in order to build truly autonomous mobile robots. The sensors have a large impact on the algorithm used for SLAM. Early SLAM approaches focused on the use of range sensors as sonar rings or lasers. However, cameras have become more and more used, because they yield a lot of information and are well adapted for embedded systems: they are light, cheap and power saving. Unlike range sensors which provide range and angular information, a camera is a projective sensor which measures the bearing of images features. Therefore depth information (range) cannot be obtained in a single step. This fact has propitiated the emergence of a new family of SLAM algorithms: the Bearing-Only SLAM methods, which mainly rely in especial techniques for features system-initialization in order to enable the use of bearing sensors (as cameras) in SLAM systems. In this work a novel and robust method, called Concurrent Initialization, is presented which is inspired by having the complementary advantages of the Undelayed and Delayed methods that represent the most common approaches for addressing the problem. The key is to use concurrently two kinds of feature representations for both undelayed and delayed stages of the estimation. The simulations results show that the proposed method surpasses the performance of previous schemes.
CitationMunguía, R.; Grau, A. Concurrent initialization for Bearing-Only SLAM. "Sensors", 01 Març 2010, vol. 10, núm. 3, p. 1511-1534.
URIhttp://hdl.handle.net/2117/6953
DOI10.3390/s100301511
ISSN1424-8220
Publisher versionhttp://www.mdpi.com/journal/sensors
Collections
Share: