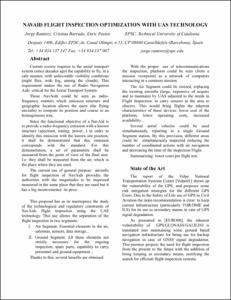 Document typeConference report
Rights accessOpen Access
Abstract
Current society requires to the aerial transport system (since decades ago) the capability to fly, in a safe manner, with unfavorable visibility conditions (night flies, with fog, among the clouds). This requirement makes the use of Radio Navigation Aids critical for the Aerial Transport System. Those NavAids could be seen as radiofrequency emitters which emission structure and geographic location allows the users (the flying aircrafts) to compute its position and course in an homogeneous way. Since the functional objective of a NavAid is to provide a radio-frequency emission with a known structure (spectrum, timing, power...) in order to identify this emission with the known site position, it shall be demonstrated that this emission corresponds with the standard. For this demonstration, a set of parameters shall be measured from the point of view of the final user. I.e: they shall be measured from the air, which is the place where they are used. The current use of general purpose aircrafts for flight inspection of NavAids provides the authorities with the magnitudes to be inspected measured in the same place that they are used but it has a big inconvenience: its price. This proposal has as its masterpiece the study of the technological and regulatory constraints of NavAids flight inspection using the UAS technology. This use allows the separation of the flight inspection in two segments: I. Air Segment. Essential elements in the air, antennas, sensors, data storage... II. Ground Segment. All those elements not strictly necessary for the ongoing inspection, spare parts, capability to carry personnel and ground equipment... Thanks to this, several benefits are obtained: With the proper use of telecommunications the inspection, platform could be seen (from a mission viewpoint) as a network of computers interacting in a common mission. The Air Segment could be resized, replacing the existing aircrafts (large, expensive of acquire and to maintain) by UAS adjusted to the needs in Flight Inspection: to carry sensors in the area to observe. This would bring flights the inherent characteristics of these devices: lower cost of the platform, lower operating costs, increased availability... Several aerial vehicles could be used simultaneously, reporting to a single Ground Segment station. By this provision, different areas could be simultaneously inspected reducing the number of coordinated actions with air navigation and decreasing the time of the inspection Flight. Summarizing: lower costs per flight test.
CitationRamírez, J.; Barrado, C.; Pastor, E. NavAid Flight Inspection Optimization with UAS Technology. A: International Symposium on Precision Approach and Performance Based Navigation. "International Symposium on Precision Approach and Performance Based Navigation 2008". Bonn: 2008.
URIhttp://hdl.handle.net/2117/6900
Collections
Share: