Improving the Performance of Route Control Middleboxes in a Competitive Environment 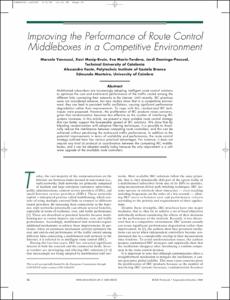 Improving the Performance of Route Control Middleboxes in a Competitive Environment (673,5Kb)
Share:

Fonte, Alexandre
Monteiro, Edmundo
Document typeArticle
Rights accessOpen Access
Abstract
Multihomed subscribers are increasingly adopting intelligent route control solutions to optimize the cost and end-to-end performance of the traffic routed among the different links connecting their networks to the Internet. Until recently, IRC practices were not considered adverse, but new studies show that in a competitive environment, they can lead to persistent traffic oscillations, causing significant performance degradation rather than improvements. To cope with this, randomized IRC techniques were proposed. However, the proliferation of IRC products raises concerns, given that randomization becomes less effective as the number of interfering IRC systems increases. In this article, we present a more scalable route control strategy that can better support the foreseeable spread of IRC solutions. We show that by blending randomization with adaptive filtering techniques, it is possible to drastically reduce the interference between competing route controllers, and this can be achieved without penalizing the end-to-end traffic performance. In addition to the potential improvements in terms of scalability and performance, the route control strategy outlined here has various practical advantages. For instance, it does not require any kind of protocol or coordination between the competing IRC middleboxes, and it can be adopted readily today because the only requirement is a software upgrade of the available route controllers.
CitationYannuzzi, M. [et al.]. Improving the Performance of Route Control Middleboxes in a Competitive Environment. "IEEE network", Setembre 2008, vol. 22, núm. 5, p. 56-64.
URIhttp://hdl.handle.net/2117/6861
DOI10.1109/MNET.2008.4626233
ISSN0890-8044
Collections
Share: