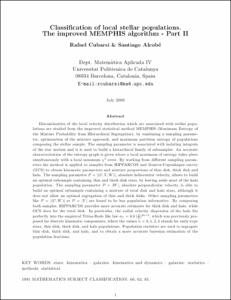 Alcobé López, Santiago
Document typeExternal research report
Rights accessOpen Access
Abstract
Discontinuities of the local velocity distribution which are associated with stellar populations are studied from the improved statistical method MEMPHIS (Maximum Entropy of the Mixture Probability from HIerarchical Segregation), by combining a sampling parameter, optimisation of the mixture approach, and maximum partition entropy of populations composing the stellar sample. The sampling parameter is associated with isolating integrals of the star motion and it is used to build a hierarchical family of subsamples. An accurate characterisation of the entropy graph is given where a local maximum of entropy takes place simultaneously with a local minimum 2 error. By working from different sampling parameters the method is applied to samples from HIPPARCOS and Geneva-Copenhagen survey (GCS) to obtain kinematic parameters and mixture proportions of thin disk, thick disk and halo. The sampling parameter P = |(U, V,W)|, absolute heliocentric velocity, allows to build an optimal subsample containing thin and thick disk stars, by leaving aside most of the halo population. The sampling parameter P = |W|, absolute perpendicular velocity, is able to build an optimal subsample containing a mixture of total disk and halo stars, although it does not allow an optimal segregation of thin and thick disks. Other sampling parameters like P = |(U,W)| or P = |V | are found to be less population informative. By comparing both samples, HIPPARCOS provides more accurate estimates for thick disk and halo, while GCS does for the total disk. In particular, the radial velocity dispersion of the halo fits perfectly into the empirical Titius-Bode like law U = 6.6 ( 4 3 )3n+2, which was previously proposed for discrete kinematic components, where the values n = 0, 1, 2, 3 stands for early-type stars, thin disk, thick disk, and halo populations. Population statistics are used to segregate thin disk, thick disk, and halo, and to obtain a more accurate bayesian estimation of the population fractions.
URIhttp://hdl.handle.net/2117/6777
Collections
Share: