Large and small-scale structures of the local Galactic disc: a maximum entropy approach to the stellar velocity distribution 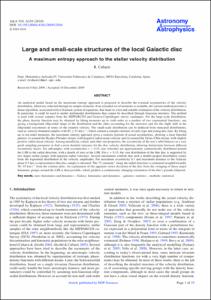 Document typeArticle
Rights accessOpen Access
Abstract
An analytical model based on the maximum entropy approach is proposed to describe the eventual asymmetries of the velocity distribution, which are collected through its sample moments. If an extended set of moments is available, the current method provides a linear algorithm, associated with a Gramian system of equations, that leads to a fast and suitable estimation of the velocity distribution. In particular, it could be used to model multimodal distributions that cannot be described through Gaussian mixtures. The method is used with several samples from the HIPPARCOS and Geneva-Copenhagen survey catalogues. For the large-scale distribution, the phase density function may be obtained by fitting moments up to sixth order as a product of two exponential functions, one giving a background ellipsoidal shape of the distribution and the other accounting for the skewness and for the slight shift in the ellipsoidal isocontours in terms of the rotation velocity. The small-scale distribution can be deduced from truncated distributions, such as velocity-bounded samples with |V| ≤ 51 km s−1, which contain a complex mixture of early-type and young disc stars. By fitting up to ten-order moments, the maximum entropy approach gives a realistic portrait of actual asymmetries, showing a clear bimodal pattern: (i) around the Hyades-Pleiades stream, with negative radial mean velocity and (ii) around the Sirius-UMa stream, with slightly positive radial mean velocity. Among metallicity, colour, and other star properties, the eccentricity of the star’s orbit behaves as a very good sampling parameter to find a more detailed structure for the disc velocity distribution, allowing distinctions between different eccentricity layers. For subsamples with eccentricities e < 0.15, star velocities are approximately symmetrically distributed around the LSR in the radial direction, with a dearth of stars at the LSR. For e = 0.15, the core distribution of the thin disc is supported by two major stellar groups with opposite radial velocities. Several simulations confirm that such a double-peaked distribution comes from the lognormal distribution of the velocity amplitudes. For maximum eccentricity 0.3 and maximum distance to the Galactic plane 0.5 kpc a representative thin disc sample is obtained. The “U-anomaly” along the radial direction is estimated straightforwardly 30−35 km s−1 from the contour plots. An explanation of the apparent vertex deviation of the disc from the swinging of those major kinematic groups around the LSR is then possible, which predicts a continuously changing orientation of the disc’s pseudo ellipsoid.
CitationCubarsi, R. Large and small-scale structures of the local Galactic disc: a maximum entropy approach to the stellar velocity distribution. "Astronomy and astrophysics", Febrer 2010, vol. 510, núm. A103, p. 1-25.
URIhttp://hdl.handle.net/2117/6707
DOI10.1051/0004-6361/200912836
ISSN0004-6361
Publisher versionhttp://www.aanda.org/index.php?option=article&access=doi&doi=10.1051/0004-6361/200912836
Collections
Share: