Contextual interactions in a generalized energy model of complex cells 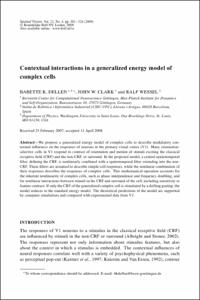 Show full item record
Dellen, Babette
Clark, John W.
Wessel, Ralf
Document typeArticle
Rights accessOpen Access
Abstract
We propose a generalized energy model of complex cells to describe modulatory contextual influences on the responses of neurons in the primary visual cortex (V1). Many orientationselective cells in V1 respond to contrast of orientation and motion of stimuli exciting the classical receptive field (CRF) and the non-CRF, or surround. In the proposed model, a central spatiotemporal filter, defining the CRF, is nonlinearly combined with a spatiotemporal filter extending into the non- CRF. These filters are assumed to describe simple-cell responses, while the nonlinear combination of their responses describes the responses of complex cells. This mathematical operation accounts for the inherent nonlinearity of complex cells, such as phase independence and frequency doubling, and for nonlinear interactions between stimuli in the CRF and surround of the cell, including sensitivity to feature contrast. If only the CRF of the generalized complex cell is stimulated by a drifting grating, the model reduces to the standard energy model. The theoretical predictions of the model are supported by computer simulations and compared with experimental data from V1.
CitationDellen, B.; Clark, J.; Wessel , R. Contextual interactions in a generalized energy model of complex cells. "Spatial vision", 2009, vol. 22, núm. 4, p. 301-324.
URIhttp://hdl.handle.net/2117/6536
DOI10.1163/156856809788746291
ISSN0169-1015
Publisher versionhttp://dx.doi.org/10.1163/156856809788746291
Collections
Share: