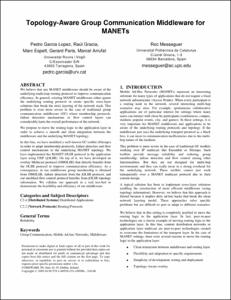 We believe that any MANET middleware should be aware of the underlying multi-hop routing protocol to improve communication efficiency. In general, existing MANET middleware either ignore the underlying routing protocol or create specific cross-layer solutions that break the strict layering of the network stack. This problem is even more severe in the case of traditional group communication middleware (GC) where membership protocols, failure detection mechanisms or flow control layers can considerably harm the overall performance of the network. We propose to move the routing logic to the application layer in order to achieve a smooth and clean integration between the middleware and the underlying MANET topology. In this line, we have modified a well-known GC toolkit (JGroups) in order to adapt membership protocols, failure detectors and flow control mechanisms to the underlying MANET topology. We have implemented the MANET OLSR protocol in the application layer using UDP (jOLSR). On top of it, we have developed an overlay Multicast protocol (OMOLSR) that directly benefits from the OLSR protocol to improve communication efficiency. As a consequence, in our middleware group membership is obtained from OMOLSR, failure detection from the jOLSR protocol, and our modified flow control protocol benefits from jOLSR topology information. We validate our approach in a real test-bed to demonstrate the feasibility and efficiency of our middleware.
CitationGarcia-Lopez, P. [et al.]. Topology-aware group communication middleware for MANETs. A: ICST Conference on COMmunication System softWAre and middlewaRE. "The Fourth International Conference on COMmunication System softWAre and middlewaRE". Dublin: ACM Press. Association for Computing Machinery, 2009, p. 1-10.
URIhttp://hdl.handle.net/2117/6460
ISBN978-1-60558-353-2
Publisher versionhttp://doi.acm.org/10.1145/1621890.1621900